Share A Heart July 25, 2014 July 25, 2014Aimee Henley, dystopia, favorite books, Giveaway, guest post, indie author, YA
Hi, all. Sher here with a guest post by A. G. Henley about her favorite books. Sometimes, my favorite book is the one I just read, but other times I find a new favorite because of recommendations like these. So get ready to fave! And yes, there’s a giveaway!

I’m occasionally asked by friends, family, and readers for recommendations of YA titles that I loved. I read a lot, so it shouldn’t be that hard to come up with a title or two, but for some reason the question throws me. I know I prefer fantasy to contemporary, and I love historical fiction. I adore strong heroines and admire robust writing. But when asked for specific books, I find myself scratching my head, wrinkling my nose, and scrabbling for names. So I decided that here and now I will list five of my favorite YA titles and tell you why they’re so great. You might spot a few you’ve already read, or you might get an idea for your next read. Either way, hopefully I won’t come across as a stammering idiot next time I get asked this question!

This hilarious series is set in Victorian London and features a crazy cast of vampires and werewolves, steampunk machines, tea-drinking (and, horrors, the occasional American). It had me at the first paragraph, in which the Author describes the Grand Collapse of a foppish vampire who has the bad manners to attempt to suck the smart, headstrong heroine’s blood in the middle of a library, during a ball, of all things. (She stabs him with her hairpin.) While reading the five books in the series, I could often be found craving a nice Assam and laughing out loud. I wrote more about the series here.

4. Under the Never Sky series by Veronica Rossi

This dystopian fantasy series definitely caught my attention for its well-imagined world, authentic-feeling characters, and because there were so darn many similarities to my own Brilliant Darkness series. My series, which stands at two novels (The Scourge and The Defiance, plus a novella, The Keeper) with two more novels to come, is about a blind girl who must face a ravaging horde of flesh-eating creatures on her own while learning to trust a boy from a neighboring community that everyone says can’t be trusted. UTNS is about a sheltered girl who must learn to navigate the hostile environment of the outside world with the help of a “savage” boy.

Both dystopian fantasy? Check. Both have fearless heroines and heroes named Peregrine (called Perry in hers and Peree in mine) who wield bows and are (if I do say so myself) pretty captivating? Check. Both have similar themes, and even several of the same character names (Sable, Willow, Bear, among others)? Check. I wonder if Veronica Rossi and I tapped into the same creative flow when we wrote our debut novels (which were even released the same month.) For all their similarities, our series are still distinctly different works in voice, setting, plot and lots of other ways (including that hers was a NYT bestseller : ) But I think it’s safe to say if you like one, you’ll like the other.

As an Indie author, I’d be remiss if I didn’t share a few of my favorite series from other Indies. I’m going to cheat, and tell you about three series I love instead of one. I defy you not to take to A.R. Ivanovich’s War of the Princes series. It is very well-written fantasy with steampunk elements that just keeps getting better with each book released. Set in the West, the dystopian The Breeders series by Katie French is dark and gritty, fascinating and disturbing in the same stroke. Finally, there’s S.K. Falls and her broody, lyrical Glimpsing Stars series. These are Indies at their best and deserve a read. Also check out the author collective I belong to, Infinite Ink, for more.


Young assassin nuns in medieval France. Need I say more? Just in case I do: twisted politics, concealed knives, high court intrigue, throwing stars, forbidden love, poison. Not to mention intricately plotted, hard to put down, and oh-so-well-written. A few of the many reasons why this series (2/3 books released as of now) is outstanding and compelling.

This might be my favorite YA book of all time. While Katsa is another tough, butt-kicking MC with the special talent of killing, she’s also much less in touch with her feelings than most YA heroines. I loved watching her confront her fears (mainly that she is only good at, and capable of, killing) while also learning to love herself and others. Po, the male protag, is as good an example of a non-alpha male main character who is still confident and supportive as I’ve read. The setting is engrossing and the writing is tight. But it’s Katsa’s journey to become who she doesn’t think she can be that made this a book of my heart.

There you have it! As I look over my list, it’s pretty easy to see that I love me some fantasy, adventure, and romance in YA. So it’s not all that hard to tell why my Brilliant Darkness series includes all three elements. I hope you’ll pick up one of these books and let me know how you like them.

The Brilliant Darkness Series by A.G. Henley
The Scourge (Book 1)

Seventeen-year-old Groundling, Fennel, is Sightless. She’s never been able to see her lush forest home, but she knows its secrets. She knows how the shadows shift when she passes under a canopy of trees. She knows how to hide in the cool, damp caves when the Scourge comes. She knows how devious and arrogant the Groundlings’ tree-dwelling neighbors, the Lofties, can be.

And she’s always known this day would come–the day she faces the Scourge alone.

The Sightless, like Fenn, are mysteriously protected from the Scourge, the gruesome creatures roaming the forests, reeking of festering flesh and consuming anything–and anyone–living. A Sightless Groundling must brave the Scourge and bring fresh water to the people of the forest. Today, that task becomes Fenn’s.

Fenn will have a Lofty Keeper, Peree, as her companion. Everyone knows the Lofties wouldn’t hesitate to shoot an arrow through the back of an unsuspecting Groundling like Fenn, but Peree seems different. A boy with warm, rough hands who smells like summer, he is surprisingly kind and thoughtful. Although Fenn knows his people are treacherous, she finds herself wanting to trust him.

As their forest community teeters on the brink of war, Fenn and Peree must learn to work together to survive the Scourge and ensure their people’s survival. But when Fenn uncovers a secret that shatters her truths, she’s forced to decide who and what to protect–her people, her growing love for Peree, or the elusive dream of lasting peace in the forest.

A tale of star-crossed lovers, strange creatures, and secretive, feuding factions, THE SCOURGE introduces readers to a rich and exciting new world where nothing is as it seems.

“The prose flows smoothly and easily but there are much deeper issues lying beneath the surface of the story that are captivating and will hold the interest of readers of any age . . . I was quickly transported into the world of The Scourge and plummeted breathlessly toward the resolution. This is a very good book and a good look at just what science fiction can achieve when in the hands of a capable writer.”
— Josef Hernandez, Examiner

“From the moment I started reading this book I was hooked . . . The Scourge is not only a story of survival; it is also a story of awakening, love, family devotion.”
— ReadingDiva, blog review 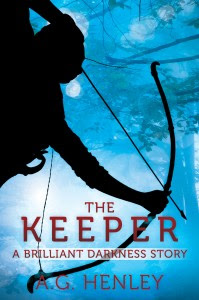 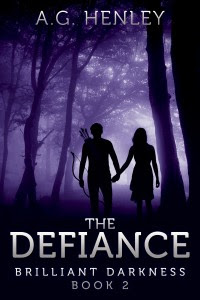 A.G. Henley is the author of the BRILLIANT DARKNESS series. The first book in the series, THE SCOURGE, was a 2013 Next Generation Indie Book Award Finalist.

A.G. is also a clinical psychologist, which means people either tell her their life stories on airplanes, or avoid her at parties when they’ve had too much to drink. Neither of which she minds. When she’s not writing fiction or shrinking heads, she can be found herding her children and their scruffy dog, Guapo, to various activities while trying to remember whatever she’s inevitably forgotten to tell her husband. She lives in Denver, Colorado.