Home about me From my Heart to Yours at Christmas

From my Heart to Yours at Christmas

Share A Heart December 18, 2011 December 18, 2011about me, Boy Scouts, cause, Christmas, country, family, patriotism, religion, service, writing
Wow. It’s almost Christmas and I had so many scheduled posts during November, I never posted this piece about my family’s service to country with some reminiscences thrown in. Though I’m late for Thanksgiving, I’m early for the new year with “Auld Lang Syne”, which means “times gone by”, right?  Now, while others are decorating their homes for Christmas, I’m decorating my blog with old family photos and memories.

It’s never too late to give thanks. To start with, I’m grateful I was born healthy, and that I was born into a beautiful world in a free country at a time when life is much easier than in the past. I am grateful that many of my ancestors served in the military protecting their families’ and country’s freedom. I don’t have their pictures, but I do have one of my father-in-law serving in Korea. He’s the one on the left.

He and his buddy talked about religion most of the night they expected to die when the North Koreans overran their position. Hearing his buddy talk about Christ’s visit to His other sheep in the Americas was important to a man of Native American Heritage. I don’t know the whole story, but I do know my dad-in-law converted to the Church of Jesus Christ of Latter Day Saints (LDS) years later when a pair of missionaries knocked on his door. It wasn’t this door. I’ll let you wonder about the bullet hole awhile.

For now, I’ll just say my dad-in-law moved his wife and children to Utah, where I met his oldest son. I was 15 at the time that son told his mom he was going to marry me. We hadn’t even gone on a date yet. But he was right. He stuck to me like glue until I realized we were going to be together forever.

As newlyweds, we went in the Air Force together. Few people know about the “Join Spouse” program, similar to one where buddies get stationed at the same base. Our first duty station was Barksdale AFB, Louisiana. That’s where we took our first college classes. I picked up an accent, y’all. Then we went to Hill AFB,Utah, where we continued college, and I lost the accent. I served in the Air Force almost 6 years. I had difficulty getting pregnant, but eventually had the first of my 4 sons right before I got out. 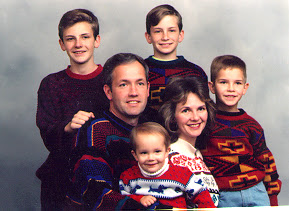 With all the job transfers to different states with conflicting general education requirements and mismatched degree programs, I ended up taking 13 years to finish my BS degree, sons in tow. Boy, was that fun. Uh, no. I got pneumonia after my first son’s birth, but once I could stand up without passing out, I hauled him to classes to finish my Associate degree. I’m glad my professors put up with us when he disturbed class. I lost so much weight, I got a “survival” award at the graduation banquet, all in fun.

Going to school with my second son was wild. At two, he could climb up to unchain the door, escape our house, strip, streak, and take a leak in the neighbor’s yard in the time any other two-year-old could fail to open the door. Lucky for me, the college had a preschool. My son climbed the walls, and so did his teachers, but we both lived until we both graduated.

Hubby finished college much sooner. Even before I got my 2-year degree, he got his 4-year degree, plus a commission as an Air Force Officer. We suffered a lot of financial and emotional effects from frequent moving, but got used to it. The time went fast. Hubby retired only to start working for the Air Force as a civilian, still working in our country’s defense. Though it was difficult, all 4 of our boys became Eagle Scouts. The picture below was taken at my youngest son’s Eagle Court of Honor this spring.

My oldest, dressed as Akela, served 5 years in the Air Force while taking college classes. After graduating as an electrical engineer, he got a civilian job with the Air Force. He’s currently on leave to work on his Master’s degree and won’t be home for Christmas. My second son, in the suit, went on a mission to Korea but didn’t like college. He’s a sushi chef. He lives and works near enough that he’ll stop by–for a while. He keeps his clothes on now but still doesn’t stay in one place for long.

My third, the tallest, went on a mission to Honduras and came back to start college, but moved to Utah this summer to establish residency there to qualify for in-state tuition. He just got a job and can’t get time off to come home for Christmas. My youngest is still home, but this year will be his last here because he plans to go into the Air Force soon. Full circle. Two served God directly and two indirectly because in serving their country they help maintain its religious freedom.

As spread out as my sons are in age, I never thought I’d make it to the empty nest years. I’m not sad like a lot of moms might be–yet. I just find it difficult to get motivated to decorate, make cookies, etc. I want grandchildren like my sister has, but my sons aren’t even married yet. Don’t get me wrong; I’m grateful to have them. I count my blessings every night when I go to bed and realize anew how very blessed I am.

Freedom of religion is one of my most cherished blessings. It’s the reason most of my ancestors fled their homelands to find a better life. I’m grateful to have inherited their histories a few years ago, giving me a new appreciation for their sacrifices that allow me to live such a privileged life. One of them kept a bullet that killed a religious leader of my faith right here in the USA, proof that our precious freedoms can be endangered by those who ignore the law or twist it to serve their own ends. I don’t know if the hole in the door above was made by that same bullet, but it might be.

In the forefront of this picture is the man killed by the bullet that my ancestor kept, known to us as the Prophet Joseph Smith. The Prophet’s brother Hyrum is behind him, and you might guess we’re the short ones. I’ve never had trouble getting my second son to stay in one place long enough for a picture, even if he won’t always say “cheese.” I’d like to think he stood still because he felt the importance of the events that led to this picture. Joseph Smith would have died to defend any man’s freedom of religion as much as his own.

He believed that Christ came to the Americas to visit His other sheep after His death in the old land, and that Christ’s church existed here as well. You can find out more at LDS.org or Mormon.org. If you’re one of the people who tries to tell us we’re not Christians, please check for yourself how many times the Book of Mormon refers to Christ as the Savior of mankind.

I’m not asking you to join us, although I’d love it if you did. What I am asking for is tolerance, and for those of you who think our religion is a cult to redefine the word. We don’t worship our prophet; we worship Christ. We serve our country as any patriotic American would, and we celebrate Christmas as Christians. But has America’s heart grown large enough to give us  such a Christmas gift as acknowledgement that Mormons are true Christians? It’s up to you.

There, I’ve done it again. Without any warning, my writing took me where I had no plans to go. I told myself when I started this blog that I wouldn’t talk about religion, yet on rare occasions it comes out. I could blame this post on Christmas, because when it comes to writing, I go wherever the inspiration leads me. This time it led me to ask of you to consider the next Mormon you meet as one of the least of these, Christ’s brethren, and treat us as you would Him. You’ve probably already met a Mormon who gave you some Christlike service. If you don’t remember, it’s likely because they did it without your knowing who they were or what they did in the interest of following the Savior’s footsteps and maintaining peace on Earth.