Hey, all, it’s Sher here with a different kind of post, a tribute to Sir Terry Pratchett and a goodbye. The picture below came from the LA Times obituary.  I like it best of the ones I found because he’s in his element. 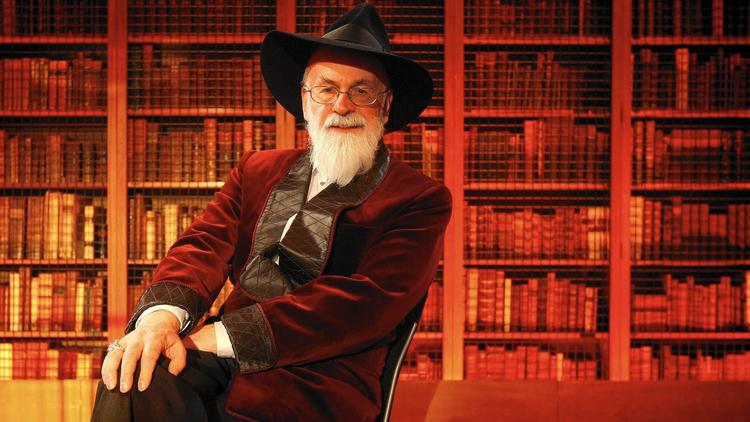 I don’t remember whose book I read that first made me realize fantasy could be funny, but ever since I’ve sought out  humorous books over all others. And Terry Pratchett’s Discworld books weren’t just funny, they were satirical fun. When I got rid of most of my books before moving, I kept my Terry Pratchett. And when I unpacked boxes after my most recent move, I kept searching until I found my Discworld collection.

Alas, after all these years, my collection still incomplete for lack of some of the starter books. Without the reading order guide I used to have, I don’t even remember the names of the series starters. So I was happy to find a more interesting guide inserted in the International Business Times article today.

Although I couldn’t resist putting the picture here where I’ll remember to look next time I want to read a Discworld book, you should read about the main characters of the various series in the same IBT article. Terry spoke with one of my favorite characters, Death, via Twitter before “the end.” Or after. Who can tell?

If you haven’t read Terry Pratchett’s books, you should. Everyone needs a good laugh. Best of all, the books won’t run out if Terry was right about his daughter taking over.

@TerryandRob’s (Rob Wilkins is/was Terry’s close friend) second to last tweet goes here. Although the picture came through, please see the text there because it explains the form of Alzheimer’s that Terry had, and there’s a place you can donate to Research Institute to the Care of Older People (RICE).

Goodbye, Sir Terry, and may your sharp wit ever light up the black desert under the endless night.