I didn’t dream when I wrote lyrics and melody for a hymn about sacrifice on Wednesday that on Thursday my father-in-law would die. We knew it was coming but didn’t expect it so soon. Not living nearby, we hadn’t witnessed the last two months of his deterioration. I remember him best like he looked when I first met him. He wasn’t a sheriff then, but he sure seemed formidable. I was 16 and dating his oldest son, Jim Jr.

Jim Senior’s first wife died many years ago, and he later remarried. Two springs ago, he and his second wife of 18 years flew down to visit us for his induction into the Gourd Society, or the Kiowa Black Legging Warrior Society, a Native American organization for war veterans. If I were home, I could post a picture, but I don’t have that one here. Last spring he and his wife visited again, and Jim was more more frail but cognizant. His wife said he was having a lot of trouble with war flashbacks, however, and he was under treatment at the VA.
His health further failed over the summer until his wife worried she couldn’t take care of him. He would often wander outside, but he was inside when he finally fell and broke his hip. It couldn’t be repaired surgically due to the condition of his heart. He’d had a quadruple bypass many years ago and multiple heart attacks since. My hubby went up to Indiana to help settle his dad into a nursing home.
Following another heart attack, my father-in-law was finally diagnosed with Alzheimer’s. Apparently trauma accelerates the progress of the disease. It may have been the reason for the sudden onset of his Korean War flashbacks.

He was only a teenager when he first joined the Air Force to go fight to protect his country. 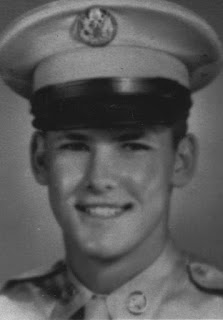 All these years later, the doctor said he wouldn’t come home from the nursing home again. My husband and his brothers and sister received calls to divide their father’s belongings. I went on the next trip and helped by sorting through all the technology stuff, copying picture files, etc. My mother-in-law had all she could do to maintain their home, pets, and spend enough time with her husband while he still knew her. We had some nice visits with him in the nursing home, but they were short. His mind wandered a lot, and he asked me questions that told me he knew me, but he got some things confused with someone else’s past.
Alzheimer’s didn’t take my father-in-law. We got a phone call Wednesday afternoon that he was in a coma, and hours later another call that he’d died. The doctor said it was most likely a blood clot from all the time he spent in bed. I can’t help but wonder if the time he spent in the trenches, in poor conditions and fighting for his life along with those of his countrymen and the South Koreans, accelerated his aging and decreased his body’s ability to recuperate. I can’t say.
I can say he made great sacrifices in the name of freedom. That kind of sacrifice wasn’t the kind I was thinking about when I wrote the lyrics to this hymn. Maybe it was, in part, because my father-in-law certainly sacrificed a lot to live his religion, one he first heard about Christmas Eve in the Korean trenches from a buddy. This isn’t that buddy, but I don’t have a picture of Dale Springer.

Years later, Jim joined the church his buddy taught him about, The Church of Jesus Christ of Latter Day Saints. None of us would be free to worship as we please if not for him and other patriots who fight to keep our country free.
It seems fitting that I dedicate this hymn to my father-in-law, James Earl Hartwell. After his son and I got engaged to be married, this man gave me my first idea of the extent of love in his heart. Knowing my own dad had been killed when when I was six, he offered to become my father. I never really took him up on the offer, but maybe this hymn will make him smile.

Lord, accept my sacrifice, though small compared to thine.
Please accept my offerings to build thy church divine.
In thy sight, the widow’s might and rich man’s tenth are one.
Both obey by sacrifice. In faith, thy will be done.
Some give much in sacrifice: wealth, family, and friends,
Yet gain all the Father hath, and blessings he now sends.
Lord, I give by how I live; my tithe is one small part.
With my humble sacrifice, accept my broken heart.
Thinking of thy sacrifice, the life thou gave for mine,
Turns my heart in love to thee and thence to all mankind.
May I see my neighbor’s need and do as thou hast shown.
As I live unselfishly, Lord, claim me as thine own.
I should mention that although I direct the choir for our congregation, I’m far from qualified. Since I only play piano with a couple of fingers at once, I appealed for help writing the accompaniment. I did write a melody but I’m not fond of it. If any of you readers are accomplished musicians or know one, I would love you to contact me with your ideas. Even if you don’t sing a lick of music, I’d love to hear what you think, and I’d love to send your condolences to the rest of the family.